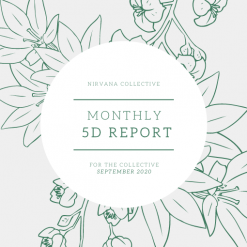 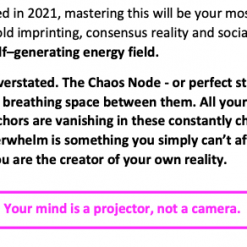 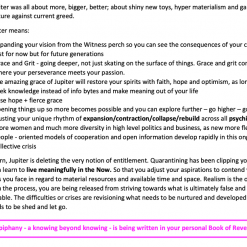 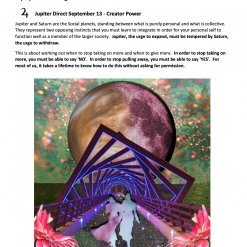 This is a 6-month discount bundle – September 2020 will be available for immediate download & each month you can look forward to a new report sent to you.

In 2020, we are truly living Between Times and Between Worlds.

This evolutionary process began to exponentially accelerate in 1975 when we entered a once in every 26,000-year cosmic phenomenon known as the Galactic Alignment Zone and continues until we finally exit on December 21, 2021.

Get this monthly transition to 5D report so that you can prepare yourself for the energies ahead & to know exactly what aspects of your personal life you would benefit most from focusing on.

This is a physical product that will be physically shipped to you.

The period between 1975 and 2021 has presented an opportunity to humanity for the greatest degree of conscious & spiritual awakening to occur in the shortest window of time. We are in-between times and in-between worlds; in-between a third-dimensional to fifth-dimensional consciousness shift.

For two millennia, the world has lived out the shadow of a Piscean Age in which polarity, duality, victimization & separation have dominated. This is a time of deep questioning as we learn how to navigate the weeks, months & years ahead & the decades that follow.

How do we dissolve and transcend devolutionary systems and structures and move in to consciously awakened times defined by core principles, such as Truth, Love, Integrity, the Wisdom of the Heart, and the Directive of the Soul?

The only way to do so is together.

We are now in the amplified second half of this Sacred Wild Ride of 2020 and what used to be the etheric is getting quite physical. Social change is on the rise.

And don’t forget: that entire structure is, in turn, squared by disruptor Eris, the nemesis of fake news, bringing the truth to the surface.

From August 18 until November 19, 2020, Pluto returns to the exact degree of 22 degrees Capricorn – a Master Number – where it met Saturn in Capricorn on January 12, 2020, for the first time in over 500 years. Pluto’s return will initiate a deeper wave of the major clearing and cleansing.

Truth needs to be served up, raw and cold & clear, whether it is about racism or the dark side of modern economics or the environment. Due to the laws of synchronicity, it is a command from the universe. Truth is saying, “Ready or not, I’m coming.”

This is a time of preparation for what is to come and in order to effect major transformation we need to reflect, reassess, redress, rebalance & re-orientate, personally and globally.

All the ghosts of the past are catching up with us.

All of this has enormous personal, private meaning for every one of us.

Universally, it is time for personal reflection. But collectively we can no longer ignore the handwriting on the wall. In December, those two massive planets Saturn and Jupiter finally pull away from Pluto. With their historic conjunction – aka the Great Chronocation – we enter a new chapter of human history.

On December 21, we turn around and face where we are going.

As the evolutionary Reset changes the world around you beyond anything you could have imagined, are you still living locked into personal systems and structures and beliefs long past their expiry date?

If you are trying to login as an affiliate, please do so from the Affiliate Area page.